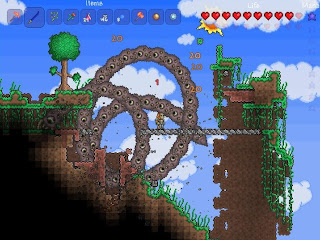 Ahh, the Eater of Worlds. The best thing about the Eater of Worlds is that when he shows up, it's your fault. The Eater is spawned when you smash enough of the dark crystal balls in the Corruption, which is only possible after you've crafted a fairly high level hammer. When you smash a crystal, you get a cryptic message, something like, "A horrible chill runs down your spine..." The first time one of our group did so, there were four or five of us in the server, and upon that text appearing at the bottom of the screen, one of our players immediately disconnected. It turned out he wasn't up for whatever was coming.

After two more orbs were smashed, the rest of us realized that we were also not ready for what was coming.

Seeing that massive worm barreling through the cavern, was an eye-opening experience for me during the game, and pretty much the exact moment when I realized it was time to upgrade my armor and find some more life crystals. Eventually, after upgrading your gear and getting the hang of the Eater's mechanics, the fight becomes fairly easy, and a good way to generate a bunch of money. But I won't forget that first time, when I got chewed up and spit out...or not spit out, rather, but definitely chewed up.