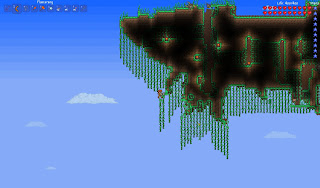 I'm sure that a lot of people found out about sky islands from the internet, but I'm delighted to say that my group of friends came across our first sky island by chance. We had been having a pain of a time traversing the countryside getting from one side of the map to the other, so we decided to build what we called a sky bridge, an elevated line of stone blocks across the map. With some jumping around, a friend came across the vines hanging from one of the islands. I honestly thought he was joking about the island when he started talking about it, but it turned out he was telling the truth...and he reaped the rewards. When he showed the rest of us a few dozen pieces of nice ore, a cloud in a bottle, and some other assorted loot, we were all on the hunt for other islands.

Though the harpies that patrol the sky islands were a bit of a nuisance, the "Whoa Nelly" wasn't so much from being panicked or threatened. It was more of a, "Whoa Nelly, what a cool thing they did in this game with these sky islands."

That's not so much the case with #2. Tune in tomorrow to read all about it.