#4 - The Dungeon (and those asshole skull ghost things) 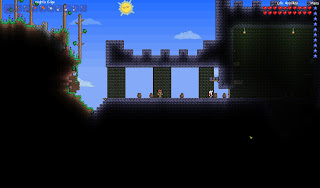 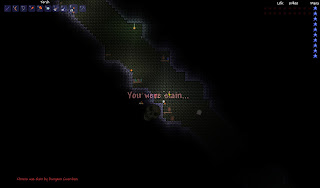 I knew the dungeon existed fairly early in my Terraria-playing days, well before I actually delved into it. The trailer for the game showed part of the boss battle against Skeletron, the "gatekeeper" of the dungeon, so I had some sense of the situation when my friends and I finally found the dungeon entrance in our travels. But I didn't have any idea exactly what sort of dangers lurked in the dungeon.

We started to go into it, and then these flying skull things started zipping around. So we do a little dodging and weaving, pop a couple shots at the skulls, and then one of us takes a hit and just gets obliterated. We try to regroup, but there's no way around it; these flying skulls were just massacring us. After about a dozen deaths, we finally realized there was something up with the situation, and did our research to find that we needed to defeat Skeletron to eliminate those bastards, but for a few minutes we had a hilariously panicked time.
By GoodPointJoe at July 23, 2013