So I go through a phase every couple years where I buy all kinds of Magic cards on eBay. I almost exclusively buy bulk lots, generally those that have been picked through and lack any meaningful cards. I bought a repacked box of Innistrad that lacked most removal, presumably because whoever the guy was who bought the box took out all the removal. Plenty of decent cards, but a lot of the good stuff is missing.

Anyways, I like just looking through cards and putting together decks, so I started doing that. Instead of trying to put together the "best" decks though, I put together decks that would be appropriate for the Duels of the Planeswalkers games; they have some rares, some commons, some uncommons, and they focus more on being varied and interesting than on being "perfect" decks. This was partly because I enjoyed the DotP games a lot, and partly because I don't have all that many rares to work with, so I'm often limited by inventory.

I eventually put together seven different decks (so far), and I posted them on TappedOut.net to be able to share. You can see the list of them here.

What I'm asking for from you, the community at large, is twofold.

First, I do want feedback. If you see a card that has one of those "strictly better" alternatives, let me know. While I might not have the replacement card handy, it's good to know what the decks could use. For example, I know Myr Superion would be a great addition to my Poor Man's Myr deck, but I don't have any of them in my possession, so it didn't go into the list.

Second, if you're feeling generous, why not donate some of the cards I need to make these decks on Magic: Online? The vast majority of the cards are no longer eligible for Standard use, so I can't imagine they have much value. Maybe you have a bunch of copies of Fling or Rot Wolf sitting around; I can use them! I have virtually zero cards from these decks, so anything you can provide would be fantastic.

As I get more locked in on the various decks, I'll start making individual posts for them, where we can discuss them at length, and I can make a desperate plea for your cards. Until then, stay classy.
By GoodPointJoe at December 10, 2012 No comments:

Time to play a new game. I want you all to:
-Rate the overall deck
-What are it's strengths/weaknesses
-Prediction on how it did in 8-4 Draft
Go...... 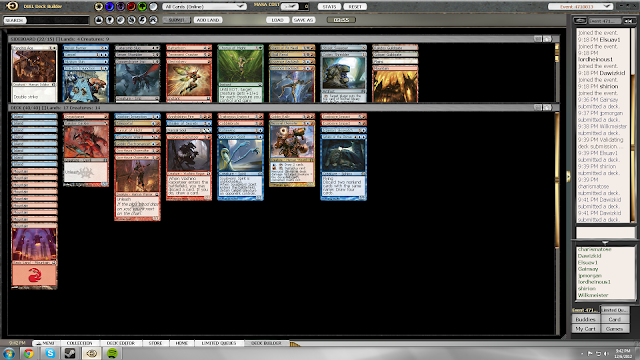 Let us know in the comments an if you can guess how it did and total game losses we'll give away a pack. Even though that cheapo James doesn't want me to, I'm the nice bro.
By GoodPointJoe at December 06, 2012 1 comment: