I'm a huge fan of Terraria. If you check out my Steam profile, you can see that I've spent over three hundred hours mining, constructing, exploring, and slaying. It's often described as a 2D Minecraft (by myself as well), which is accurate enough, but the implication is that Terraria is a dumbed down version of Minecraft, and that's not fair. Terraria has a much stronger combat system, a more robust suite of enemies, better graphics, and a killer soundtrack.

Terraria has also offered some multiplayer moments that rival even the most heated battles in Left 4 Dead or Payday in terms of intensity. The game really captures the idea of the wilderness being this treacherous, unknown area, where danger lurks at every turn. Here are the top five "Whoa Nelly" moments from my first time playing through Terraria.

(For those of you unaware, the phrase "Whoa Nelly" has a special place in my heart since Earthworm Jim.)
#5 - Jungle Shrine 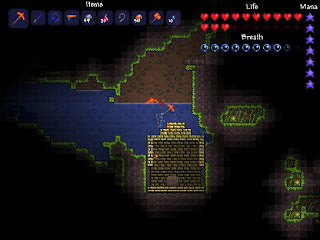 The first time I came across one of these, I was mystified. What on earth are gold bricks doing down here? And...ooh, treasure. When it comes to Terraria, there are two things I really go crazy for: high-end blocks and treasure. Finding both of them was a delightful surprise in the dangerous depths of the jungle.

Of my five "Whoa Nelly" moments, the jungle shrine was the least scary, which also makes it the least fun to talk about. It was a nice surprise, but didn't hold a candle to the other four. Which is my way of saying, stay tuned.