So here's a little exercise for the bros.  We've split up the cards from M13 into six sections, and one bro is going to write a list of his five favorite cards from the set that fall into that section.  Here's how they'll be handled:

We toyed with the idea of excluding rares from our discussion, but the reality is that we like all sorts of cards for different reasons.  And besides, anyone worth their salt can tell you that it's much more important to have commons and uncommons that you really like, because you're probably not going to see Xathrid Gorgon every draft.

To kick us off, here are my Top 5 Favorite White Cards from M13: 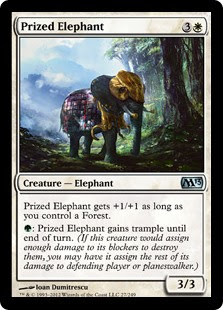 I might be kind of a knucklehead when it comes to Magic, but I like the idea of cards that have the potential to be worth more than their cost. The most obvious way this happens is in circumstances where the card becomes more valuable in a particular situation, like Metalcraft, or Morbid, or, as with Prized Elephant, when you choose a particular combination of colors. Now, I've looked at some of the Return to Ravnica cards, and the complexity is pretty daunting. But in simple situations like this one, I like the card a lot. 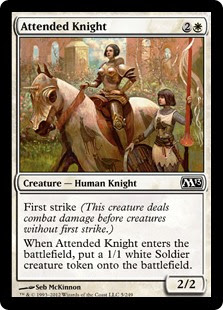 If you know me at all, you know that one of the main reasons I like white is the abundance of first strike. I think what caused that a lot is that, when I first started playing, it took me a while to truly grasp the concept (and several dozen frustrating moments of play). After getting pummeled enough by it, you start to realize its value. Attended Knight would be a decent card if it were a 2/2 first strike 3-drop, but on top of that you get a little soldier token. Not wildly valuable, but it helps when you need a chump blocker, or if you've got a Trumpet Blast in your pocket. Truthfully, Pacifism feels just as "lame" as picking some rare bomb like Captain of the Watch, because it's so, so good. But it does have a tiny bit of elegance to it, because it embodies its name. The creature cannot attack or block; however, if it's got activated abilities it can use outside of combat, those are still an option. It's not as strong as Arrest, and nor is it quite as expensive. But it's very, very good. And in a color without a ton of removal, it's crucial. 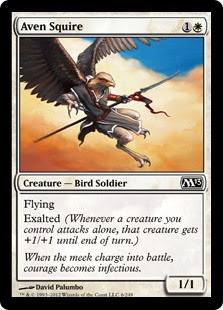 White is also known for its cheap flyers, and this set is no different. War Falcon is a neat card, but for this list I'm going with Aven Squire. It's a very powerful early game card. On its own, it can often get in for a few beats, and it often takes some time for opponents to handle flyers. Additionally, it doesn't LOOK that powerful, so people can feel bad burning a Plummet or Deadly Recluse on it. Late game it loses some mustard, but hey, most 2 drops do. As a last bonus, it's a Soldier type card, so it gets benefits from Captain of the Watch, and allows War Falcon to attack (making it a 3 power flying attacker when Exalted pops). Intrepid Hero is 100% my kind of card. It's single-white, so it fits nicely into multicolor decks (which are basically all you have when you're drafting). And its ability is just fantastic. White is a color that has some trouble handling opposing creatures outside of combat, so it runs into some difficulty when face with big ass creatures, like the ones green can dish out. Intrepid Hero is also a nice way to stifle combat tricks like Trumpet Blast or Titanic Growth: "Pump him and he dies." And as a last plus, soldier bonus.

But what about...
Look for my bros to share their thoughts in the near future.

No love for the Odric? I thought that guy would be right up your alley...

Oh, I'm a fan of Odric. But I set out to only pick one rare, and to not pick any of the most overwhelmingly "rare" rares. I think White might have the best rares in the set, on the whole.

I like your list Joe and can't wait to see what you will come up with for the colorless. Thoses are definitely your wheelhouse.