I chose to do the Green and Red articles because somehow, I usually end up drafting GR in m13. I mean a lot. So I have a little bit of knowledge about these two colors. ONce again these are my top five FUN cards to play with. Some of these are sweet cards, but others are just silly fun. 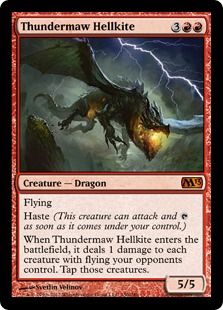 OK. We start, again, with a very powerful (mythic) rare card. But anyone lucky enough to have one of these in your deck, and actually cast it, can attest to the joy that ensues. A 5/5 Flyer for 5 already sounds awesome. Then add in Haste and the very relevant ability to tap/kill your opponents flyers, GG. Just play this card and watch as your opponent's well laid out board dissolves to mush. Then feed that mush to your opponent with a spoon...Here comes the train! Open up the station CHOO CHOO! 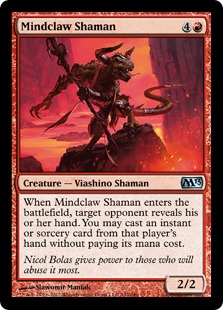 This may be my fvorite red card of all. Most people consider it a sideboard card against decks with lots of sorceries/instants, but I can't help myself. Let me give you an example. Obvi we are playing GR and we are on the play. Turn one Arbor Elf means this guy gets played on turn 4...before our opponet can cast his Talrand's Invocation. Uhh. Yeah. Sick turn bro. Your opponent thinks he is about to play one of the best value cards in the set, when out of no where you steal it from him and cast it yourself. Your opponent will cry...or flip the table...or both. BTW, this is what James did to me in our first Live M13 draft. Clearly I lost. 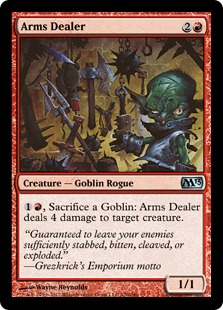 Arms Dealer is fun on so many levels. First off, just look at that picture. He is so cute! I just want to give him a hug. Also, goblins are inherently fun cards and after you pick Arms dealer, all you really want are a ton of goblins. As far as power level goes, obvi he is sweet, however having only one toughness does present a problem against most decks. 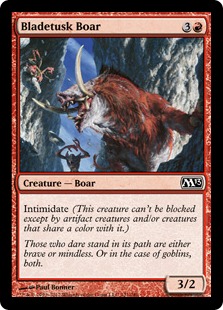 I find base red decks to be pretty rare when drafting M13. And with so few artifact creatures, Bladetusk Boar does good work in most matches. Hitting for 3 every turn is not the worst way you can spend 4 mana. It mkes for a decent blocker if needed as well. But all of that is not the fun part, whats really fun is comboing the boar with ... 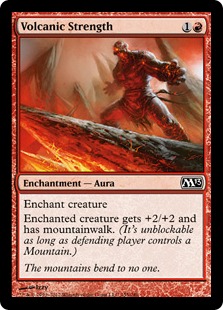 This may be over doing it a little bit, as well as exposing yourself to the drreaded 2 for 1, But a 5 power unblockable guy to all decks except for the Non-Red with artifact creatures is pretty fun. I admit, I don't run this in most decks, but once you know you are playing against red its an auto include for me. The 2 power is great but getting the extra 2 toughness is what does it for me. It puts most cards out of range of the cheap removal.

Krenko, Mob Boss and Firewing Phoenix were two cards I was considering. Krenko is the absolute nuts. Amazingly hard to beat in limited without have removal already in your hand waiting. But I only wanted to have one rare card and I chose the Dragon.

Firewing phoenix seems sick, but the decks I draft almost always have red as a secondary color, and can't reliably be able to bring back the phoenix from the graveyard.

So what do you think of my list? Please be nice, I have a fragile ego.
By GoodPointJoe at October 17, 2012