We got back to the hotel at around 2:00, and my mom left for her massage at about 2:40. When she left, she said if we wanted to head to the park before she got back, she would just meet us there. Initially, I didn't expect to do this, but as time went on, it became more and more of a plan. I can only watch so many episodes of Disney Channel shows before I get antsy. So Kevin and I headed to the park at around 4:15, and left a note for my mom.

Kevin and I weren't really sure what we wanted to do when we arrived, so we wandered around Fantasyland for a while to ponder our plan. We stopped by Mickey's Philharmagic, but sadly it was closed for refurbishments. This might mean they're adding to the show, which is cool, but it sucks that we missed one of the better attractions. My mom called as we were wandering around and let us know she was leaving the hotel. Not having any other plans on what to do, we hopped on Mad Tea Party, which had virtually no line (this would sort of be the standard for the evening). Kevin and I then hit up Buzz Lightyear's Space Ranger Spin again, and met up with my mom as we were leaving this ride. 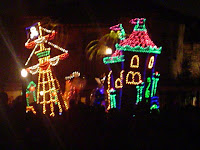 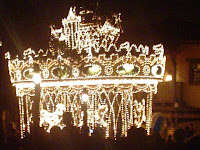 As it was getting to be nighttime and the weather was cooling off, my mom wasn't crazy about going on Splash Mountain, so she waited and watched the evening parade while Kevin and I went on the ride. There was no wait. And I don't mean there was a short wait. There was no wait. We followed the queue right up to the ride boat. And after the ride, we could've just stayed in the boat for another round; there was no one waiting to get in. Apparently the parade is a big hit, but also, the park switched to Extra Magic Hours around this time, so it was clearing out a little bit, too.

One of my mom's favorite rides is the Haunted Mansion, so we headed over there next. We probably waited all of five minutes for this ride, three of which were because the ride stopped briefly and the line didn't move forward. As we were exiting the Haunted Mansion, we heard the booming of fireworks, and tried to find a good spot to watch them. It's a nice show with some Disney music to go along with it, and there's something that gets me about seeing the fireworks with "When You Wish Upon A Star." What can I say, I'm a sap.

After the fireworks, we stayed in Fantasyland and hopped on The Many Adventures of Winnie the Pooh, the last of our favorites from the 2008 trip that we hadn't ridden yet. At this point, we were once again in a wandering mood, and we headed over to the Tomorrowland Transit Authority for a night ride (separate review below). Kevin and I made the Tomorrowland Speedway our last ride of the trip, while my mom went to the Carousel of Progress, which I've still never been on. 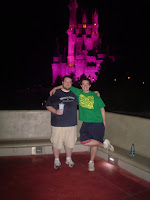 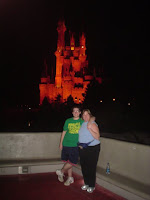 We stopped at Cosmic Ray's, which is a diner, for some horribly unhealthy food (they got burgers, I got a chili cheese hot dog), and set out for home, satisfied that we had a great trip, but a little sad that we'd be flying home the next day. We took a few pictures with a view of Cinderella's castle that came out pretty well, and would be a good Facebook album cover if I ever get around to posting these pictures on Facebook...don't count on it, though.


The next morning was fairly uneventful. We rode Disney's Magical Express back to the airport, and encountered no difficulties at security (it was stunningly fast, actually). We took off from Orlando where it was 78, and landed at Dulles International Airport, where it was 28 degrees and snowing. Welcome home, vacationers. And that was the trip. I'm already organizing our next trip in my mind. More time at the Magic Kingdom seems to be a no-brainer. Oh, and we've got to go back to the Yak & Yeti restaurant at Animal Kingdom! And I'd like to try out Soarin', and eat in Norway, and...