(With regards to rides, I'm going to use the same strategy that Plundo did, waiting until the end of the post to rate the rides, and using a 5-star system).

Friday night was nice, but the reason you go to Disney World is to ride rides (or at least, that's the reason I go to Disney World). And when you want a lot of rides, there's no better place than the Magic Kingdom. Kevin slept until about 11:00, so we didn't start our day until around 11:30. 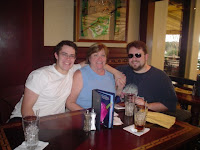 The sit-down restaurant at Sarasota Springs is called the Turf Club Bar & Grill. I had a good burger (not a Goodburger), and Kevin and my mom both got the yellowfin tuna per our waiter's recommendation. They seemed to enjoy it, and I enjoyed mine, so we started our day's activities on the right foot. We hopped on a bus to the park and arrived in ten minutes or so. 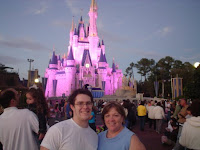 When we arrived, we realized that there was a parade scheduled to come through the park shortly, and we weren't really looking to watch it, so we hopped on the Walt Disney World Railroad, which carries passengers to a couple stops around the park. We got off at Frontierland, and picked up Fast Passes for Splash Mountain. If you're unfamiliar, a Fast Pass is essentially an appointment for the ride. You can pick it up at any time during the day (only one at a time, though), and you'll be given a window later in the day during which you can redeem the pass and ride with virtually no line. It's a nice feature, taking some of the waiting time out of your theme park visit.

Armed with Fast Passes for Splash Mountain in 2 hours, we decided to check out a couple other rides. We hit the Mad Tea Party, Buzz Lightyear's Space Ranger Spin, and the Tomorrowland Transit Authority. We stopped off for ice cream and headed back to ride Splash Mountain (which I hadn't ridden in our trip last year, so it was a new and exciting experience).

Sufficiently happy (and a little soaked), we basically wandered the park for the rest of the day, hopping on whatever struck our fancy: Pirates of the Carribean, It's a Small World, and Peter Pan's Flight. Tired and pleased, we grabbed a bus back to our resort, and went back to the Turf Club for dinner. Our meals were good, but the real highlight was dessert. They cook some chocolate cake with chocolate from Madagascar, then top it with vanilla ice cream and some raspberry sauce. It was delicious.

Back to the room, I read more of Moneyball and got to bed early for Sunday, which would be our first "park-hopper" day.

Walt Disney World Railroad (2/5) - It's a railroad, fairly straightforward, and with surprisingly vanilla scenery. I only gave it two stars because it's functional, and it did what we wanted it to do, which was drive us to Frontierland.

Mad Tea Party (4/5) - It's not at all the kind of ride that you couldn't see at a standard amusement park, but it was a lot of fun. For those of you who've played Rollercoaster Tycoon, think Scrambled Eggs. There's a disc in the middle of each cup that you can spin manually to adjust your level of spinning; Kevin and I went pretty nuts with it.

Tomorrowland Transit Authority (3/5) - It's a simple transportation ride (as its name would indicate), but for whatever reason, I like it. It's relaxing, it's never in direct sunlight, and it gives you a tour of Tomorrowland.

Splash Mountain (5/5) - I loved the music and the atmosphere of the ride, and the drops are fun. This is my mom's favorite ride at the Magic Kingdom, and when we rode into "Brer Rabbit's Laughin' Place" at the end of the ride, they both laughed loudly and intentionally, which made the ride even more fun. It's also got comfortable seats, something that's particularly valuable for such a giant of a man as myself.

Pirates of the Carribean (3/5) - I like water rides, so Pirates gets a bump there, but really it's not a very exciting or interesting ride. It's essentially a slow river ride through a pirate town. They added a ship and a fort with some cannon fire, but in my opinion, not enough, and not enough explosions and damage on either side. I guess it's supposed to be a gentle ride and they have to maintain that, but I'd like a little more excitement. The Jack Sparrow singing at the end of the ride is pretty neat, though, and it gets the song in your head. 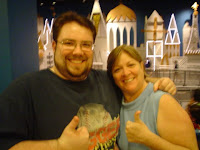 It's a Small World (2/5) - Another first-time ride for me, there was no line and I felt like I ought to do it at least once since it might be the most famous ride in Disney World. It was okay, not as good as some people have told me, but also not as bad as some other people have told me. It was another boat ride as well, so that was alright.

Peter Pan's Flight (2/5) - The line was 30 minutes, but my mom likes the ride, so we hopped in and waited. I remembered not liking the ride at all last year, so I wasn't expecting much, and the ride met expectations. I tried to like it more than last time, though, and that seemed to work, because last year I'd have given it a 1/5.

Next up: A split Sunday between Animal Kingdom and Hollywood Studios