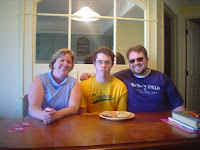 We took a few minutes Monday morning to briefly decide where we were going to go before going to the Magic Kingdom in the evening (the Magic Kingdom was the beneficiary of Extra Magic Hours that evening, and I've found that it feels right to end a Disney World trip at the Magic Kingdom). After a short discussion, we all decided that we hadn't really seen any of Epcot in our previous trip, so we'd head over there for a few rides and lunch.

Epcot doesn't have a ton of great rides, as its main attraction is the World Showcase. And because the World Showcase brings a lot of traffic with only a few rides, most of the rides have fairly long queues. Because of this, we didn't end up going on Soarin', probably the most popular ride at Epcot. Instead, we headed for Test Track, which had been recommended to Kevin by one of his friends (and which made me think that it was going to be pretty hazardous). I did survive, but I selected a gentle ride as a follow-up, Living with the Land, which sported a five-minute wait. I assumed it would be a lecture about taking care of the environment, but it was a boat ride, so I was willing to take the chance. 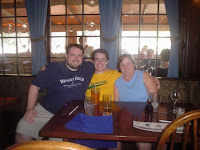 For lunch, we decided to go to the U.K.'s sit-down restaurant, the Rose & Crown Pub and Dining Room. I wasn't crazy about a lot of the stuff on the menu, but the burger I got was pretty good, and I had some of my mom's fish and chips, also pretty good. Additionally, I got a beer sampler which had Guinness, Harp, Boddington, and a couple others I don't remember. They were all okay, but I've found that I'm more of a sweet drink kind of guy. The bitterness of the average beer just doesn't sit that well with me. Still, it was a fun experience and a good meal.

We finished lunch around 1:30, and it was time for us to head back to the hotel. My mom wanted to take advantage of the fact that Saratoga Springs is a spa, so she set an appointment for her first ever massage at 3:00 PM. Kevin and I were up for a break after a very filling lunch, so we all headed back and got ready for our final park visit of the trip: the Magic Kingdom.

Test Track (4/5) - The introduction video was pretty funny (and starred John Michael Higgins), and the ride itself was sort of as expected. It was a little bit chaotic, and boasts the fastest speed of any ride at Walt Disney World. It gives you a better appreciation of how fast you're going when you drive 65 miles per hour. It was Kevin's favorite ride of the trip.

Living with the Land (3/5) - I was pretty surprised that this was as enjoyable as it was. We checked out a movie called "Circle of Life" when we came last year, and it was basically a lecture on taking care of the Earth. This ride started out that way, with pictures from around the world of how people were working to be more efficient and conserve resources, and I was a little suspect of the rest of the ride. But it ended up kind of cool. You pass through a fish farm (all you eco-freaks can shove it, breeding fish to be eaten is no different from breeding corn to be eaten) and a horticulture lab (with a Mickey-shaped pumpkin). The whole ride is on a boat, which I believe I've mentioned I enjoy. On a warm day, it was a nice, cool, soothing ride.