At the hotel, we relaxed for a bit (I spoke to my cousin Mike briefly on the phone), and we geared up for Hollywood Studios. After all of the hype that Plundo built for Toy Story Mania, I was looking forward to a pretty fun evening, and for the most part, I wasn't disappointed. 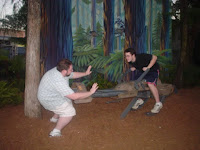 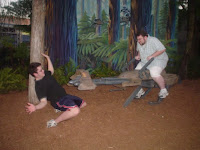 When we arrived, we checked out the big board that has all of the rides' wait times, and saw that Toy Story was an hour wait with the Fast Passes depleted for the day, so we opted instead for Star Tours, which was a 5 minute wait. The alleged 5 minute wait might have been all of 2 minutes, and we quickly and happily rode one of our favorites from last year. After that, we hit up another favorite of ours in Muppet Vision 3-D (again with no wait), before deciding to try out the line at Toy Story. It was listed as a forty minute wait, and even though it would be the longest wait of the trip, the line didn't seem to be getting shorter, so we hopped into the queue.

(It bears mentioning here that the camera batteries ran out at this point, which is why there aren't more pictures of Hollywood Studios).

After enjoying Toy Story, we contemplated getting in line again, but the wait time was back up to an hour, despite being after 7:00 PM, and thus into Disney's "Extra Magic Hours" (the last and perhaps greatest advantage of staying in a Disney resort). So, we headed for Rock n' Roller Coaster, one of Kevin's favorite rides. I didn't end up going on the ride (I'm wary of how my girth is handled by coaster seating systems), but Kevin had virtually no wait, and enjoyed it. Choosing instead to embrace my heft, I grabbed a Flavor Blast ice cream cone, which is soft serve vanilla ice cream with some sort of syrup lining. I had a banana split flavored cone, and it was tasty.

We looked around for a few places to get dinner in Hollywood Studios, but by this time, most sit down restaurants were closed, and the ones that were open were diners, which are okay, but not worth waiting in line for. So we headed back to the hotel and ordered pizza and breadsticks from Disney World's delivery service. The pizza was surprisingly excellent, I'd say better than Papa John's or Pizza Hut (though still miles behind Zio's). I curled up with Moneyball and finished it, and went to bed, looking forward to another day full of rides on Monday.

Star Tours (4/5) - The ride is pretty fun, but the best part is all the little Star Wars lines and characters and such. I'm a sucker for Star Wars. There's also an AT-AT outside the ride that makes laser blast noises at night, and a whole themed area around the ride. They have a life-sized replica of the Ewok village toy that I have about six of in my basement, but unfortunately, it's not designed as something you can go into. Hopefully they'll consider adding that...or creating an entire Star Wars theme park...man, I would go to that.

Muppet Vision 3-D (3/5) - As Plundo said, the best part of this show is the two old cranks who make fun of the show. "Hey, how did you get such good seats?" "There was a contest. I lost!" I feel like I should go back and try to find some episodes of the Muppet Show, because I'm pretty sure I would appreciate the old guys more today than I did back then.

Toy Story Mania (5/5) - It wasn't my favorite ride of the trip, but it was a damn fun ride. Like I said when I talked about Buzz Lightyear's Space Ranger Spin, I do like the mission concept a little better than just the general shooting gallery style of Toy Story Mania. But there's no questioning that the technology is superior here, and while it was essentially a video game in a ride car, I like video games, so it was a blast.