I have a few basic online decks that I've created over the years, and I occasionally play online with them. They're generally underpowered, but as long as you're not looking at some elite standard deck, they've got a shot. Well, the other day I put together a very basic red/green slivers deck, using only cards from M14. It has no rares, and is decidedly underwhelming. Still, I've been able to put up a decent fight from time to time. I joined a 2-headed-giant game (which almost always means that your two opponents know each other and have built decks that synergize), and went about my business. Things were fine until one sequence made my partner quit. My draws were numbered at that point, but I figured I'd play it out. A couple minutes later, here was the board state: 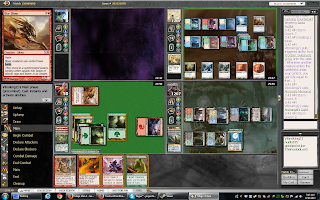 Yeah, 1207 life, two Serra Avatars, and Akroma's Memorial. Obviously I did not come back.
By GoodPointJoe at August 20, 2013