You know how everyone loves to say "defense wins championships"? Well, here's one more bit of proof for you. When a colossally bad offense goes up against a trash defense, the defense apparently wins out. The Chiefs came into the game on Sunday giving up over 27 points a game, and held the poorly coached, double-quarterbacked Redskins to a pair of Shaun Suisham field goals. Embarrassing? Yes, I'd say so.

So here's the deal. Today, instead of a classic report card, we're going to switch it up a little bit. We'll do sort of a "State of the Redskins" article, and talk about the team's abilities and performances to date, rather than focus on the debacle that was this Sunday's game. Also, I'm only going to talk about the offense here. We all know the defense has played well enough to win most games.

Historically, I've shied away from saying what a team should do. I've accepted that I know a lot less about the inner workings and intricacies of professional football than even the lowliest assistant coach, and I've deferred to their decisions. But at this point, I don't exactly feel like the Redskins have a bevy of elite football minds at work here, so I'm going to make an exception and get my hands dirty.

The Washington Redskins' offense has gotten most of the blame for their poor start, and deservedly so. The Redskins average 13.2 points per game, putting them 4th-worst in football. The three worse teams are the Browns, Raiders, and Rams; not exactly pleasant company. But in reviewing their statistics, perhaps the biggest concern is this: they're not particularly good at anything. Passing yards, rushing yards, first downs, time of possession, giveaways, times sacked and sack yardage, the Redskins are in the bottom half of every category. The closest thing that Washington has to a "strength" is completion percentage, in which they rank 13th. But we've seen what you get when a team completes a lot of passes that go nowhere: a 2-4 record through the weakest opening schedule of all time.

So how do you fix it? Changes in personnel aren't really an option, with the trade deadline tomorrow and with the hard salary cap in football. But you certainly don't want to give up on the season altogether; there are always positives that you can generate going forward. Your only option is to re-position that same assemblage of players such that they'll be more successful. You have to change the way you use those players, to better highlight their strengths, and to mask their weaknesses.

The task then becomes to figure out what these players can do well, which probably takes a better eye than I've got, but I'll take a crack at it. First off, Todd Collins is a nice backup, but he's not your starter. His skillset is narrow and unimpressive; your only chance at righting the ship at all is with Campbell at the helm. Campbell has a good scrambling sense, and isn't bad at throwing on the run...or at least isn't worse. But Campbell can never think that he'll be benched mid-game again. That can lead to panicked decision-making, and you can't quarterback a team that way.

With a depleted offensive line and no elite receivers, the passing game has to find ways to give Campbell enough time to throw. I emphasize the "enough" because if you have shorter routes and quicker releases, you can put less pressure on your offensive line. I suggest a lot of shotgun formations, play-action, and bootlegs, anything you can do to create time for the quarterback. You probably also have to sacrifice any five-receiver patterns, for two reasons. First, Campbell hasn't shown that he can process five different routes quickly enough that the fifth receiver will ever be an option. Second, you're going to need to keep a running back or tight end in to help protect. Three- and four-receiver patterns should be the hallmark of this offense.

A Perfect Time To Panic

You also need the receivers to run crisp routes and display excellent hands. Interestingly, Antwaan Randle El is probably your best receiver in those regards, and he needs to be on the field more. Pull him from punt returns altogether, you need him fresh when the offense starts, and he hasn't been good back there anyways. You can roll with Santana Moss, or maybe try DeAngelo Hall. The Redskins also have youngster Marko Mitchell out of Nevada who dazzled folks in the preseason with excellent hands and play-making ability. There's nothing to risk and a lot to gain by putting him out there at this point to see if he can play when it counts. Would you prefer that Devin Thomas or Malcolm Kelly were the productive youngsters? Sure, but when your offense is stagnant, it doesn't matter where a guy was drafted. It's panic time.

I don't know that there's anything to change about the running game that's going to help you. The Redskins have three of the same running back on the roster in Clinton Portis, Ladell Betts, and Marcus Mason. There's not really anything wrong with them, they're just all the same. As I said last week, the 'Skins need someone like Darren Sproles, a guy who truly offers a change of pace. That guy isn't on the roster, so you just go with what you've got. But, there's nothing wrong with putting Moss or Randle El in the backfield from time to time. They're speedy guys who make the defense react to a different look. No, they're not running backs, but as we've said, nothing so far has worked. To paraphrase a scene from The 40-Year-Old Virgin, what's felt "right" hasn't worked. It's time to try some "wrong."

The big story today (big enough even to grace the front of Yahoo's Sports page) is that play-calling responsibilities will be turned over from Jim Zorn to Sherman Lewis. The talk is that this may be a precursor to a change at head coach in Washington, with Lewis, offensive line coach Joe Bugel, defensive coordinator Greg Blache, or secondary coach Jerry Gray taking over in the interim.

I think this would be a mistake. Very little is gained by firing Jim Zorn right now, versus later, or just allowing his contract to expire at the end of the season. The only small advantage you gain is in being able to position yourself earlier for interviewing new head coaches at the end of the season, but even that is debatable. Certainly no one thinks that the Redskins won't have a coaching vacancy in the upcoming offseason, and owner Dan Snyder has made no secret of the fact that he will not be outbid. Any coach potentially interested in the Washington head coaching job will know that the job is available, and that if they get chosen by the Redskins, they'll be paid handsomely.

There is one circumstance where a coaching change would make sense, but it's extremely unlikely. If the Redskins are able to hire their head coach of the future right now, mid-season, then firing Zorn is the right move. If John Gruden, Bill Cowher, or (if he becomes available) Jeff Fisher is willing to take over the team immediately, then you've got half a season for that coach to get in-game experience with the players on the team today. That would give the new coach a chance to evaluate talent, chemistry, and attitudes, so he can make informed decisions about next year's roster.

However, to my knowledge, such a situation has never occurred with an outside coach, and no potential head coach in the organization would be a long-term answer. So I'm sticking with Zorn the rest of the way. You would give Zorn a chance to try to prove to other teams that he can coach in the NFL, which is just the stand-up thing to do. You also avoid what would inevitably be a PR disaster, and perhaps most importantly, it would help to temper Daniel Snyder's reputation as an impossible owner to work for.

Not A Complete Waste

Despite the nauseating performance by the Redskins this Sunday, the day did have one bright spot. Late Sunday, as I was reading through articles about the day's action, I came across a photo of a prominent New York Giants fan. Her name is Reby Sky, and (at least for today) she is the most beautiful woman I have ever seen. 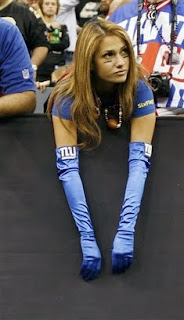 Seriously. Go to her website and see how smokin' hot she is. Really, really, really, really ridiculously good-looking. Anyways, we'll go back to the conventional report card system next week, after the Monday night game against the Eagles.

Ok I agree that in most cases, coaching changes made mid-season do not make a difference but Mike Singletary may want to argue that point. I don't think anyone on the Skins coaching staff is head coach material but again I didn't think that of Singletary either. And yes, she is quite striking, at least face wise.

Singletary was 5-4 as a replacement head coach last season, and is 3-3 now, for a grand total of 8-7. There's nothing wrong with 8-7, but I don't know if we can call him a difference-maker just yet.