As many of you know, I went to Disney World last weekend, and as per Plundo's suggestion and example, I'll give you a run down of how the trip was (along with the occasional complementary picture and relevant Wikipedia links). I took the trip with my mom and my youngest brother, Kevin.

For starters, I was sick. I got sick at the beginning of last week, and just got sicker as the week went on. Friday morning, the day of our flight, I was sick as a dog, and had been swigging Dayquil and Nyquil to try to bust up the cold before the trip. No such luck. I ended up blowing my nose at least 100 times over the course of the trip, but I was able to shut out most of the sickness with the distraction of the parks.

We left the house around 9:30 to catch our 12:00 flight out of Dulles. We were able to get through security without too much of a wait. Our flight was fully booked, but without any of the hullabaloo that Plundo had to endure, and the rest of the transportation went off without a hitch. During this trip, I spent most of my downtime and flight time reading, starting with Moneyball. If you're unfamiliar with Moneyball, it's a non-fiction book that reports on how the Oakland A's were able to field a highly competitive team despite having a small payroll and a lack of big bopper power hitters. It's honestly one of the most exciting and interesting books I've ever read, and I'd recommend it to any reasonably intelligent sports fan. 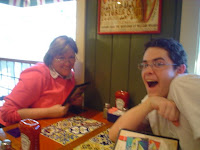 When we arrived in Orlando, we were all pretty hungry, so we got a table at the airport Chili's. I don't know if I've ever had their fajitas before, but they were better than I expected. The steak was very flavorful, and it was just enough food that I would be sated until dinner time.

We stayed at the Saratoga Springs resort, which is a Disney resort. There are several advantages of this, and the first one starts when you step out of the airport. Disney has a Magical Express service that allows you to ride one of their private buses from the airport directly to your resort. After checking in, we were offered a cart ride to the front of our building (which of course we accepted), and we headed up to the room.

The Saratoga Springs rooms are suites with a bedroom or bedrooms, as well as a kitchen and a common area. The resort has a small grocery on the property, and we went there to pick up some essentials (most importantly an Entenmann's raspberry danish). We put the groceries away, and then decided to head to Epcot (each Disney resort offers free bus rides to all of their parks, another perk of stayin at a Disney resort). 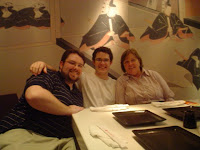 Kevin's big thing this trip (although it would slip away fairly quickly) was that he wanted to eat at as many of the different countries at Epcot as possible. This started on Friday night, when we went to the Japanese portion of Epcot. We ate at a restaurant called Teppan Edo, which is essentially a Benihana. The food was very good; they offered three sauces, each of which was different and tasty. I got New York strip sirloin steak, but everyone's food looked good (even the vegitarian selection, which was somewhat surprising). Additionally, I got a drink called a "ninja," a combination of sake and plum wine. I'm not normally a wine fan, but this was good enough that I got two.

We walked around Epcot a little more after dinner, but it was surprisingly crowded, and we were all fairly tired after a travel day, so we decided to head back. At the hotel, I grabbed a slice of danish and read a chapter of Moneyball before hitting the hay.

Next up: Saturday at The Magic Kingdom.